Paterson Racing made their first trip of the year to Knockhill and it was to prove to be a frustrating weekend for Lightweight competitor Lewis and a distinctly average weekend for Torquil.

Lewis had an good qualifying session and first race, where he managed to keep up with the quicker bikes on his standard engine bike. Unfortunately at the end of the first race of the weekend the bike developed a mysterious noise from the gearbox/clutch area. 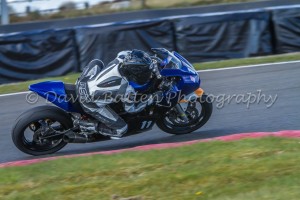 Despite a late Saturday night on the tools the team were unable to eliminate the noise, only managing to make it quieter. 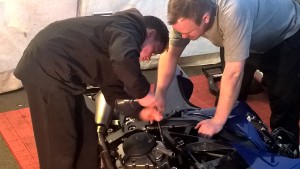 The team decided to send Lewis out of the Scottish Championship race on Sunday, but this was short lived as the race was red-flagged after two laps and when Lewis returned to the pits it was discovered that his radiator had a hole in it and was leaking!

Torquil struggled with setup all weekend, chasing gearing and suspension changes to try and get comfortable. He also suffered his first DNF of the season when a wire from the regulator rectifier broke and caused his bike to stop on circuit whilst in a comfortable 2nd place. 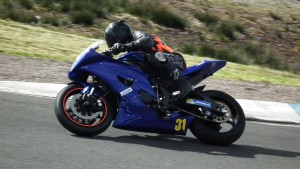 For the rest of the races Torquil battled hard with the regular Scottish competitors, and slowly improved his pace, but not by enough to be pleased.

The next outing for Paterson Racing will be a Knockhill on June 3rd and 4th.

Lewis and Owen on top of Knockhill commentary tower.