Paterson Racing rolled up to the first round of the Scottish Championship at East Fortune on 9th and 10th April 2016.

Lewis Paterson was riding in the Scottish Lightweight class on a Suzuki SV 650 supported by Cupar Motorcycles.

This was Lewis’s first time racing the four stroke, and the team had suffered a torrid build up to the race meeting with a series of technical problems meaning that  the bike did not turn up until the start of qualifying and the team only just managed to get Lewis out for the last 5 minutes and he managed only 3 laps meaning that he was going to have to start all the races over the weekend from 23rd place on the grid.

Race one was a tough baptism as Lewis was still trying to ride the bike like a two stroke and made it harder than it needed to be. He battled his way to 12th at the line.

Race two and a few minor adjustments by the team meant the Lewis was much more comfortable and starting to make the necessary adjustments to ride the bike as it needed to be. He eventually finished in 13th place.

Race three, held on Sunday morning, was in fully wet conditions, and Lewis demonstrated his wet weather ability with a spirited ride through the field to end the race in 8th place, also setting the 6th quickest lap of the race.

Race four was held in bright sunshine and again Lewis showed how much he was getting to grips with the bike by blasting his way to 7th place by the finish, setting his fastest lap of the weekend on the last lap of the race.

This was the start of Torquil’s 25th season of road racing in Scotland, and it couldn’t have gone better for the veteran rider.

Riding a Yamaha R6 in the Scottish Superstock 600 class this was the first time Torquil had ridden a 600 since 2005. It didn’t take long for him to get back into the groove and he was quickly up to speed.

After qualifying on pole position for the 4 races Torquil made good use of the track position to make good starts and dominated 3 of the 4 races from the first lap to the end. Only in Sunday morning race, held in very cold conditions, did Torquil stuggle with conditions and found himself in a real battle, eventually crossing the line in 2nd but getting the win because the first place riding was given a 10 second penalty for jumping the start. 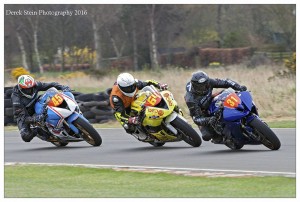 Paterson Racing will be in action at Knockhill Racing Circuit on 23/24 April 2016.