Lewis Paterson, 15 year old Perth Academy pupil from Scone, scored a memorable victory in stormy conditions at the weekend during a “wildcard” appearance at Knockhill during the British Superbike Championship.

Paterson was competing in the Santander Consumer Finance KTM Junior Cup open to riders aged 13-18-years old with every rider lining up on an identical ‘Cup’ variation of the KTM RC 390.

The KTM Cup riders had a total of 4 races of 12 laps over the weekend, 2 on Saturday and 2 on Sunday. 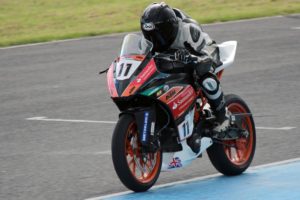 Qualifying for the 4 races took place first thing on Saturday morning in wet conditions. Paterson quickly got to grips with the new machine and the tricky conditions in the 20 minute session and qualified in 3rd place, only 0.9 seconds behind pole position, putting him on the front row for race one.

Race one was early on Saturday afternoon and Paterson made a slow start from 3rd on the grid finishing the first lap in 5th position. He quickly made progress from there though and made his way up to 3rd place by the end of lap 3. He was unable to close the gap to the lead riders and ended the race in a comfortable 3rd position.

Race two was run later on on Saturday and for this race Paterson started from 6th on the grid. Another slow start saw him finish the first lap in 7th place but again he was able to make way up through the pack to eventually reach 2nd place by lap 6. At this point there was too big a gap to the leader so he maintained the gap over the chasing pack to eventually finish in 2nd place.

Race three was run early on Sunday morning where Paterson started from 6th on the grid. Yet another slow get away saw him finish the first lap of 12 in 7th place. An incredible second lap saw Paterson pass 5 riders to move into 2nd place as they started lap 3. As this point the leader already had a healthy gap and despite his best efforts Paterson was unable to close the gap significantly and eventually he decided to manage the gap behind and brought the machine home for another 2nd place finish. 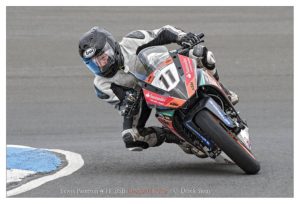 Race four was the final race of the weekend’s schedule and it was run in very wet conditions with it still raining as the bikes lined up on the starting grid. Paterson made his best start of the weekend and finished first lap in 3rd place. In the slippery conditions Paterson was peerless and moved up into the lead on lap 3 and started to pull a gap from the rest of the field, setting a series of fastest laps and opening up the gap to over 5 seconds before backing off and bringing the bike home in 1st place, over 2.5 seconds ahead of 2nd place. 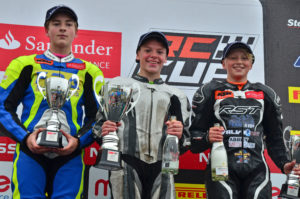 Lewis would like to take this opportunity to thank everyone who provided support over the weekend, it’s all appreciated.

The next race appearance for Lewis will be back on his Cupar Motorcycles SV650 in Scottish Lightweight Championship at East Fortune Raceway, 9/10 July.