East Fortune was the final round to cap off a thrilling 2017 season. There was a surprise in the making. Torquil had kindly been given the opportunity to ride the Carneigie Fuels BMW by Bruce Birnie. Lewis had still 2 championships to win, the Melville Open and Club championships. The weekend started off with Lewis putting the Cupar Motorcycle SV 650 on pole position. Torquil put the BMW onto 5th position on the grid, the 2nd time on the bike after practice. The 2 races on the Saturday, Lewis dominated from start to finish, winning both races. This sealed up both the championships. Torquil had 2 strong races, finishing 4th and 3rd respectively. This was the final round at East Fortune so this meant it was the Steve Hislop Memorial Race. Lewis and Torquil had both put in fast times on Saturday so had both qualified for the race on the Sunday. Sunday had arrived and Lewis again won both of the Lightweight races, meaning that he won the last 13 Lightweight races in a row. Torquil did not have the best first race on the Sunday, having to pull in with a mechanical problem with a few laps remaining. The Scottish Championship race was a thrilling race, with Torquil closing in on Lewis Rollo at the front but just missing out, but with a stroke of luck, Lewis had passed under a yellow flag, meaning that Torquil was given the race win due to a 10 second penalty. The final race of the season was the Hislop race. Torquil was sitting in 5th place, with a 4 rider battle for 2nd. Lewis was sitting in 13th place, battling with a ZX10 R. The race got red flagged due to Torquil’s water pipe bursting and water getting on track. Lewis finished 12th and Torquil got taken out of the results.

A very successful season for the Paterson family, thanks to everyone for the help and roll on 2018!!!

Round 7 of the Scottish Championship was held at Knockhill Racing circuit. It was the 2nd reverse meeting of the year and the final round at Knockhill. The weekend started off well for Lewis with a pole position and 2 wins on the Saturday. Torquil qualified 7th  and finished 5th and 4th. Lewis had secured the Knockhill Championship on the Saturday thanks to the 2 wins. On to Sunday and Lewis had 2 races in the morning. A win in the first race was an important builder for the 2nd race of the day which was the Scottish Championship race. A 3rd or higher would secure the Title with 1 round to go. Lewis went out and won the race from start to finish which meant he was the NEW Scottish Lightweight Champion of 2017. Torquil had some good solid results of a 5th a 6th and a 7th. Overall the weekend was excellent for the family especially too secure another two championships to the many already won in the family over the years. A successful year for Lewis at Knockhill finishing every race and securing 9 wins, 5 second places, 3 third places and 2 forth places and 1 fifth place.

Round 6 of the Scottish Championship was held at East Fortune Racing Circuit. Lewis was trailing both East Fortune Championships but was not far off Scott ‘Splinty’ Campbell. During Qualifying Lewis was chasing Scott and unfortunately he crashed in front of Lewis and he had no where to go so ran over the top of him! Somehow Lewis stayed on and the session got red flagged. Lewis was on pole position but ‘Splinty’ sadly had broken his ribs and took concussion due to the impact of Lewis’s bike. Sadly racing was cancelled on Saturday due to a Horrific accident including Frankie Dignan, who sadly passed away, due to his injuries. Sunday was a new day and Lewis knew this was a chance to get points back in the Championship and build a big lead. This is exactly what Lewis did, coming away with 3 wins out of 3 comfortably and gaining a lead in both the Open and Club Championships. Torquil had also a decent Sunday coming away with 5th places and a 6th place.

Round 5 of the Scottish Championship was held at Knockhill Racing Circuit. This time it was normal direction but this was a very difficult weekend. Change of weather every 2 minutes made tyre choices very hard. Qualifying went okay for Lewis with a 4th place. In the Scottish Championship race it was a solid 2nd place for Lewis. In the second race on Saturday, it kept changing between wet and dry and unfortunately the wrong tyre choice was made so a 4th place was the best result which Lewis could nurture out of. Sunday was hopefully going to be a better day for Lewis but strangely could not find pace in the first race after leading it so had to finish in a disappointing 4th place. In the 2nd Scottish race of the weekend it was very wet which Lewis was really excited about. A steady start for Lewis and he was in 3rd and was catching the front two as the rain got worse but unfortunately it got red flagged so Lewis had to take a 3rd place. In the final race of the day it was wet again and Lewis knew he could have the pace to win, he took the lead on lap 3 and never looked back and won the race. Torquil was not racing at Knockhill due to an injury from Owen which caused a fractured skull so he didnt want to risk any more injuries.

The 2017 Scottish Championship Road Racing season kicked off on the weekend of the 8th and 9th April 2017 and East Fortune Raceway, East Lothian.

It was going to be a busy weekend for the whole family. 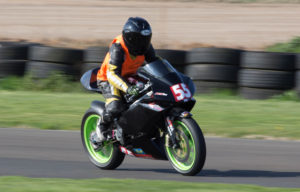 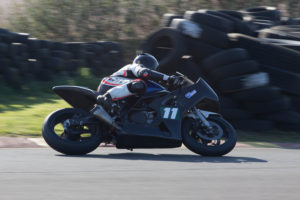 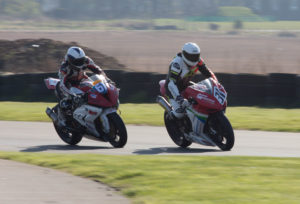 Very nice write up with good comments from Steve Plater:

Paterson Racing was making their second trip to Knockhill, this time in the reverse direction, in the 2016 Championship and it was to prove to be a frustrating weekend for Torquil on both his Yamaha and the Perth Motorcycles MV Agusta. Lewis had his best outing of the season on his Cupar Motorcycles Suzuki 650 with improving finishes and more experience on the bike.

Lewis had a good qualifying session and first race, where he managed to keep up with the quicker bikes on his standard engine bike. He was feeling happy with the bike and how it was handling.  The second race of the weekend he had a good start and was trying to stick with the leaders but the lack of power just eliminated his chances of catching the front runners. It was a solid Saturday for Lewis. 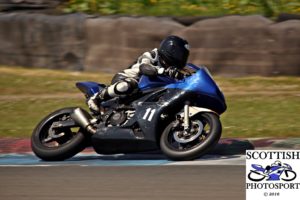 Lewis through the chicane on his Suzkuki 650

On to Sunday and Lewis knew if he could get a good start he would stay with the front runners and thats exactly what he did. Lewis’s pace was very good considering the power he had and had 3 solid finishes inside the top 5. Lewis was pleased with his weekend and he knows he can run with the front runners.

Torquil was riding 2 bikes at the weekend. His own Yamaha and also the Perth Motorcycles MV Agusta. Torquil struggled with pace and setup all weekend round the 1.27 mile circuit, and had his worst results of the season. 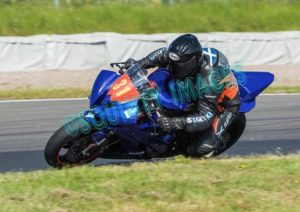 Torquil on his Yamaha 600

Torquil had his shock done in between the rounds by Jamie Black and this proved a much better feeling then previous. The MV Agusta had never been raced before so this would take time for Torquil to get to grips with the bike. Torquil quickly got the hand of the new machine and was enjoying the pace of the new bike. 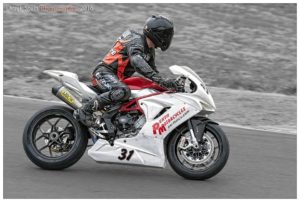 Torquil on the MV Agusta 800 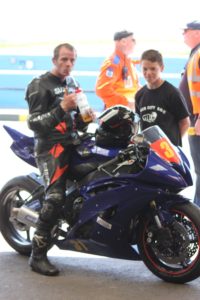 Well it’s only 8 days till track action starts at East Fortune. Still lots to be done, bikes to be prepared, trucks to be loaded. This is when it starts to get exciting! 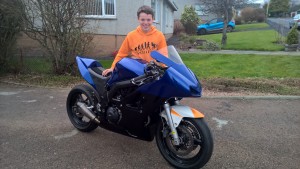 This is the most exciting month for the Paterson family as it is Lewis, Owen’s and Erin’s Birthday, Torquil and Erin’s Anniversary and most of all is that it is when they get out on the bikes again.

Hi all just a quick update. Lewis and Torquil attended the KMSC Presentation for Lewis to pick up his 1st place in the 125’s. Also New fairing and a new exhaust have arrived for Torquil’s R6. The fairings are now away to Norman Brunton Race Paints along with Lewis’s 650 fairings. 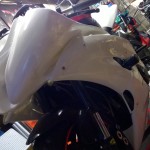 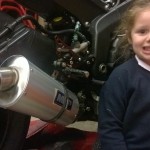 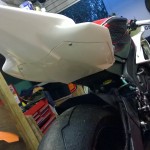 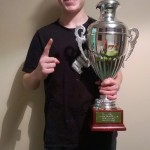 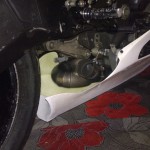